It's the last day, the last hour and the last minute of the year 2020, and this will be the final Lost In Music post. Thanks for reading and keeping up with us over the years.
Goodbye.
a 23:59 No comments:

Email ThisBlogThis!Share to TwitterShare to FacebookShare to Pinterest
Etichette: 2020

As we say goodbye to 1980 (and good riddance to 2020) here's a final playlist of selected tracks from the year, in reverse chronological order:

Email ThisBlogThis!Share to TwitterShare to FacebookShare to Pinterest
Etichette: 1980, playlist

Week by week we're listing 5 tracks which were big music news in the charts, on your radio or even in your record collection 40 years ago, this week in 1980. And here's the final five for this year.

It's Christmas week. We won't mention the number one, but instead try and pick out the best of the rest.

1. Adam & The Ants - Cartrouble. In the wake of recent success with Antmusic etc., the group's back catalogue (ca.1978) is being revisited and this one is at the top of the Indie charts this week.

2. The Look - I Am The Beat. Another one that's "bubbling under" this week, and will finally get into higher ground in the new year.

3. The Fall - How I Wrote Elastic Man. John Peel begins his festive Fifty this week. This one is at no.26 and the man himself pronounces it as his favourite single of the year.

4. The Undertones - Whizz Kids. Smash Hits was a request only edition this week, but as this one was included we'll put it in too as one that may have slipped through our radar, from their 1980 album Hypnotised.

5.  John & Yoko / Plastic Ono Band - Happy Xmas (War Is Over). Several Lennon songs in the charts this week, understandably, and this one is up at no.4.

Email ThisBlogThis!Share to TwitterShare to FacebookShare to Pinterest
Etichette: 1980, playlist 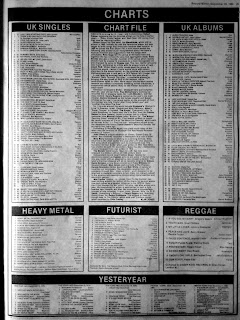 1. The Beat - Too Nice To Talk To In a fairly stagnant chart (with John Lennon outselling everything by several miles) this is the highest new entry this week down at no.31, and opening this week's Top of the Pops.

2. Specials - Do Nothing. Another new entry at no.34 and also on Top of the Pops this week.

3. The Clash - The Magnificent Seven. Their triple album Sandinista is a new entry this week at no.19 (Super Trouper manages to hold back John Lennon, dec.)

5. Gary Numan - Photograph. Numan was back in the charts, and on TOTP, this week with the single This Wreckage, lifted from the Telekon album. This is the previously unreleased B side.

1. John Lennon - Imagine Lennon was brutally murdered outside his home in New York this week in 1980. His signature song was naturally being played everywhere.

2. The Police - De Do Do Do De Da Da Da. Sting 'n' pals' new single was the highest new entry in the charts this week, from Top 10 album Zenyatta Mondatta.

3. The Nolans -Who's Gonna Rock You. Ireland's finest siblings are still in the mood for dancing and getting even raunchier with this new single in at no.40.

4. Magazine - A Song From Under the Floorboards. From the group's live album Play which entered the lower reaches of the charts this week, only te disappear again thus guaranteeing cult status.

Email ThisBlogThis!Share to TwitterShare to FacebookShare to Pinterest
Etichette: 1980, lennon, the police 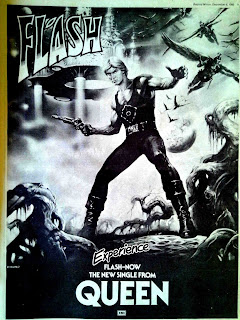 Adam & The Ants - Antmusic Follow-up to the Dog Eat Dog breakthrough hit, another tarck from the Kings of the Wild Frontier album.

Jona Lewie - Stop the Cavalry. This perhaps unintended Christmas song was the highest new entry on the charts this week at no.15 and remains a "classic" of the yuletide genre.

Stay Cats - Runaway Boys. US rockabilly nostalgics get their first UK hit this week with thsi one entering the Top 40 at no.23.

The Jam - Pretty Green. Only ABBA could stop this album entering the charts at no.1, and they did. Opening track from The Jam's new long-player Sound Affects.

Queen - Flash The British rockers' theme to the new Flash Gordon movie, written and mostly played by Brian May. Released this week.

Email ThisBlogThis!Share to TwitterShare to FacebookShare to Pinterest
Etichette: 1980, christmas

2. AC/DC - Rock and Roll Ain't Noise Pollution. This single, taken from the Back in Black album, was the highest new entry in the Top 40 this week. Eventually got to no.15.

3.  Darry Hall & John Oates - Kiss On My List. Another new entry this week and the first UK Top 40 hit for the American duo.

4. Siouxsie & The Banshees - Israel. Released as a 'stand-alone' single on 26th November, this was their attempt at a "Christmas" song. Sadly it only made no.41 in the UK, although unsurprisingly on heavy rotation on John Peel's show.

5. Blondie - Live It Up. Random track choice from Blondie's new Autoamerican album, highest new entry at no.3 in the UK this week.

1. Spandau Ballet - To Cut A Long Story Short. One of the defining bands of the eighties made their Top 40 debut this week with their debut single, and the highest new entry at no.18.

2. Madness - Embarrassment. The Nutty Boys are also new on the charts this week (no.31) with this track off Absolutely, allegedly about Lee Thompson's teenage sister.

3. John Lennon & Yoko Ono - Every Man Has a Woman Who Loves Him (from Double Fantasy). ABBA were straight in to the album charst at no.1 this week, while Lennon & Ono's comeback album entered at a more modest no.27. Penned and sung principally by Yoko, this track was later remixed highlighting only Lennon's vocal for the 1984 compilation album Every Man Has a Woman.

4. Bow Wow Wow - Louis Quatorze (from Your Cassette Pet). Opening track form the 'revolutionary' mini-album by Mlcolm McLaren's latest project which, as it wasn't released on vinyl, wasn't classified as an album at all, but only as an Ep and as such failed to make the singles Top 40.

5. Motels - Days Are OK. Lead singer Martha Davis got the Record Mirror cover this week, with a full feature on the band inside "on the eve of their UK tour". British audiences hardly warmed to this Blondie-esque US band however and the single made slow progress.

6. Boomtown Rats - Banana Republic. First new material from the Rats in 1980, and the lead single from new album coming in '81. This new single was a new entry at no.23 this week and would eventually reach no.3 by Christmas.

1. ABBA - Super Trouper. And they're back with a strong new single and "feeling like a number one". This single (and album) did eventually reach the top although it would also be their last one to do so. Highest new entry this week at no.13
2. Diana Ross - I'm Coming Out. Nothing to do with LGBT, and indeed Ross was apparently horrified when she discovered the double meaning of the phrase after the song had been written and recorded. Another track off her Diana album released back in May. new entry this week and eventually reached no.13.
3. Adam & The Ants - Kings of the Wild Frontier. Title track of the band's new album, a new entry this week at no.4.
4. The Professionals - Join The Professionals (Peel session). More post-punk fun from two former Sex Pistols and a friend. This session was recorded and broadcast by Peel although a self-titled debut album never emerged.
5. Roxy Music - Same Old Scene. Another single is squeezed out of the Flesh+Blood album and makes it to no.12, its peak position, this week.
a 13:26 No comments:

Week by week we're listing 5 tracks which were big music news in the charts, on your radio or even in your record collection 40 years ago, this week in 1980:
1. Blondie - The Tide Is High. Blondie are back with a surprising cover version of a 1969 Jamaican reggae number. Hisghest new entry this week in 1980 at no.5
2. John Lennon  - Just Like Starting Over. Another comeback although we've waited even longer for new material than we had with Blondie. More tinges of rock n roll nostalgia in Lennon's ode to both his wife and his career in music. Into the charts at 30.
3. Rod Stewart - Passion. Another lead single from another upcoming new album, Foolish Beahviour, Rod's tenth. A fairly modest new entry at 37 but would go higher.
4. Motorhead - Ace of Spades. The heavy metal revival starts here, with the album and its title track both in the charts this week. Saxon and Whitesnake were also coming out with new material around this time.
5. Modern English - Gathering Dust. Rock of a different kind for this band's new single release on burgeoning independent 4AD label. They also recorded their first Peel session later in the month (listen here).
a 14:09 No comments: 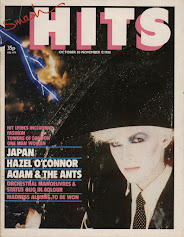 1. David Bowie - Fashion. The Duke's follow-up to Ashes to Ashes is the highest new entry this week.

2. Japan - Gentlemen Take Polaroids. From the album of the same name, this is the band's first single on Virgin (with David Sylvian looking dandy on the cover of Smash Hits).

3. Pauline Murray and the Invisible Girls - Mr X. New single getting plenty of radio play on the alternative programmes, and is certainly one of the album's strongest tracks.

4. Orchestral Manoeuvres in the Dark - 2nd Thought. OMD's new album, their second of the year, is the highest new entry at no.6.

5. Joy Division - Atmosphere. A late release on Factory, and ultimately Ian Curtis' epitaph, is straight into the indie charts at no.1