On the Mode again

and then....
..the DM official announcement did duly come yesterday. Fans who bought tickets for the concert in Leipzig, Germany on June 8th can breathe a sigh of relief as the Tour of the Universe will re-start from there. Dave Gahan has had an operation to remove a 'low-grade malignant tunour' from his bladder.
Cancelled dates have been or will soon be re-scheduled. see depechemode.com

the good burgers of Leipzig in a celebratory mood, yesterday
a 12:46 No comments:

The Universe can wait

Ticket holding Depeche Mode fans in the UK are anxiously waiting to know whether they should abandon homes and loved ones to reach the capital for the scheduled DM concert at the O2 Arena on Saturday.
So far a total of nine concerts of the much anticipated Tour of the Universe have been cancelled due to singer Dave Gahan's ill health.
An announcement as to whether London or other gigs will also be cancelled is expected later today.
Gahan was rushed to hospital just minutes before the concert in Athens earlier this month, allegedly due to 'a severe bout of gastroenteritis'.

Lost in Music asks: couldn't Gore do all the singing?

Marsheaux announce that their new 5 track EP Breakthrough will be released on Friday 29th May through all the usual download outlets.
As well as the radio edit and club mixes there will be a 'B' side called 'How Does It Feel?' exclusive to this EP release only, not be featured on the band's upcoming album 'Lumineux Noir'. It's not known whether this track is a cover version of the Slade classic.

Marsheaux : ooh look, they're talking about us on Lost in Music!
a 13:51 No comments:

Synth-pop pioneer Thomas Dolby has just released a CD/DVD retrospective collection entitled The Singular Thomas Dolby on EMI. The British artist became one of the most recognizable figures of the synth-pop movement of early-’80s new wave with songs such as "Europa & the Pirate Twins", "Windpower" and "She Blinded Me With Science" (featuring Dr. Magnus Pyke) . Dolby successfully harnessed the power of synthesizers and samplers, to make catchy pop and light electro-funk, becoming successful in the US when the 'new wave' hit America in the mid 80s. The CD covers his career from the early tracks "Urges" and "Leipzig" through to "I Love You Goodbye" and "Silk Pyjamas", while the DVD features "..seldom seen cut from his 1983 concert, “Live Wireless”.." and all the videos.

Remastered and enhanced versions of Dolby's classic albums The Golden Age of Wireless (CD/DVD) and The Flat Earth are also set for release in June. Although the new CDs contain "all peripheral songs from each era that didn’t make it onto the albums for whatever reason" Dolby also promises that extras will also be available as free downloads from the official web site. 12" extended versions have been avoided.
Dolby is currently working on a new studio album which will include songs performed on the 2006/2007 Sole Inhabitant tour called "Your Karma Hit My Dogma" and "Jealous Thing". The 2009 edition of the Eurovision Song Contest has been won by Norway's 23 year old contestant Aleksander Rybak with the self-penned "Fairytale". The young singer-songwriter of Bielorus origins was a strong favourite and came first in Moscow with 387 votes beating Iceland into second place (218 votes) and Azerbaijan 3rd (207 votes). Rybak, son of a pianist and violin player, begaun playing both instruments at 5 years old. The rousing number, sung in English, has a strong melody and chorus as well as a catchy folk style violin line as played by Rybak himself on stage.

This year's contest held in Moscow was the most expensive to date at an estimated cost of 42 million euros. The show was also somewhat overshadowed by the Gay Pride parade held on the same day as the final in the Russian capital, which saw several arrests. the parade had not been approved by the city's mayor Iuri Luzhkov.
Mr. Luzhov..zero points.

Ex Velvet Underground member John Cale will be representing his home country of Wales at the Venice Biennale arts festival this summer.
Born in Garnant, South Wales, Cale attended Goldsmiths College, London. In 1963, he moved to New York, where he met LaMonte Young, Andy Warhol, and Lou Reed, and founded The Velvet Underground.
For Wales at Venice 2009, Cale will produce a new audio-visual work made in Wales, in collaboration with artists, filmmakers and poets. The work has at its heart Cale’s own personal relationship with the Welsh language and the issues surrounding communication. The installation will be gheld in the ex-birreria, a former brewery on the island of Giudecca from June 7th to November 22nd 2009.
Jonathan Jones in The Guardian describes the work as "a wonderful spoken-word recording, like a cross between Dylan Thomas and William S Burroughs played on an old radio".

Intriguing...might be worth a vist.

Awaydays: soundtrack to a generation

The soundtrack to the new movie Awaydays, based on the original novel by Kevin Simpson, will be released on 25th May and features some of the best 'new wave' music from the 78/79 period. Ultravox!, Echo & the Bunnymen, Joy Division, Cabaret Voltaire, The Human League, The Mekons are just some of the names on the CD accompanying the film to be released in the UK on the 22nd.
Putting together the soundtrack on a low budget was not an easy task, as Simpson eplains in a recent article in The Guardian.
The film's producer is David Hughes, formerly of Dalek-I and and early line-up of Orchestral Manoeuvres in the Dark. The legendary Eric's Club in Liverpool features in the film.

"David Hughes and I are unusual in that we have a background in music", explains Simpson, "and we really wanted to clear a glut of new wave classics for that £10,000. We had our work cut out."
Well, full marks for the end result. Looking forward to the soundtrack as much as the film.. 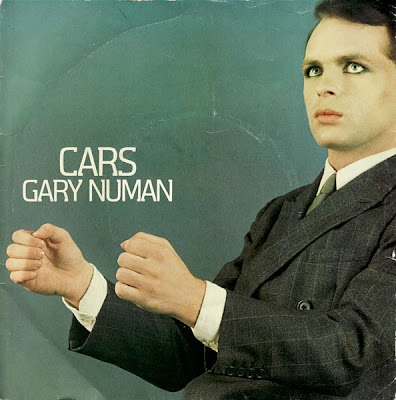 Gary Numan is said to be preparing a special concert in Manchester in November to celebrate the 30th anniversary of his first solo album 'The Pleasure Principle' and seminal synth-rock/pop single 'Cars'.
Nuworld also states that "It's possible that other Pleasure Principle shows will be added around this Manchester gig to create a Pleasure Principle mini tour."
Numan recently performed anniversary tours of both his Telekon and Tubeway Army's Replicas albums, although towards the end of the latter the performer expressed in typical style that he was tired of 'nostalgia' tours and wished to concentrate on new material only.
Numan's schizophrenic attitude towards avid fans and touring is not unknown: his songs Sleep By Windows and Remind Me to Smile and general 'stand-off' attitude are testament to that. In 1980 he also announced his decision to 'retire' from performing live. After the 'farewell' shows in 1981, he returned to the live circuit in 1983. Numan is married to long-time fan Gemma O'Neill, and they have two children. Gary Numan: he's got Asperger syndrome
a 10:51 No comments:

Mick Karn is set to release his new solo album 'The Concrete Twin' later in the summer. The artist's official site gives the full tracklisting although no definite issue date.

Karn (real name Anthony Michaelides) has enjoyed an eclectic yet prolific solo career since departing from Japan in 1982. Most noted for his work with the art-rock group, his distinctive fretless bass sound has been used with a wide range of artists from Kate Bush to Gary Numan as well as re-joining his former bandmates David Sylvian, Steve Jansen and Richard Barbieri on various projects. Andy McCluskey of OMD has given an exclusive radio interview to Dave Charles on Midlands station Harborough FM. In the interview McCluskey goes over his 34 year career with Orchestral Manoeuvres in the Dark and reveals that the new album will be out "next year".
The support slot on the Simple Minds tour later this year is also discussed. Although the role as support band has been derised by many fans McCluskey sees the tour as a way of playing 'arenas' rather than theatres. McCluskey reveals that the set will be very much a 'greatest hits' package although denies the '80s revival' type aproach.
The two bands also share a similar history coming from the respective post-punk scenes in Glasgow and Liverpool, both eventually signing to Virgin and achieving mainstream success in the early 80s. Despite internal divisions over the intervening years both bands have remained active continuing to release albums and perform live.
Simple Minds' new album Grafitti Soul is out on 25th May.

Simple Minds : alive and kicking so don't you forget about them.
a 11:48 No comments:

Kraftwerk in a Kraftwerk and on TV

Ralph Huetter of Kraftwerk, or rather his robot, has given an interview on German TV ahead of the Altes Heizkraftwerk (geddit?) concert in Wolfsburg on 26th April last. Not surprisingly, Huetter revealed little not only of himself but, in true Kraftwerk style, also of the band and their work. Placing his own robot in front of cameras and interviewers Huetter gave the usual enigmatic answers to precise questions. When asked what music he listened to he replied: " sounds, only sounds". The 'man-machine' philosphy continues: "We play the machines and the machines play us".

There were no big surprises at the Schneider-less Wolfsburg Kraftwerk gig. Setlist here at setlist.fm

the KW Wolfsburg gig mixing desk.
a 11:21 No comments:

Italian singer, songwriter and all-round musician Morgan (Marco Castoldi) has recently published a new solo album featuring Italian songs from the 50s and 60s which were translated and recorded in English to varying degrees of success in the same period.

Italian Songbook Vol. 1 features 4 songs re-recorded and sung by Morgan in Italian and in English, most notably Il Mio Mondo, better known to British audiences as You're My World, a hit for Cilla Black in the 60s.
Morgan sees the album as a 're-evaluation' of Italian popular songwriting of the era, but which has been lost since then.

After a relatively unsuccessful musical career both with his band Bluvertigo and as a solo artist, Morgan has recently become a household name and obtianed greater success in Italy thanks to his role as judge and mentor in the Italian edition of X Factor. His eccentric manners and often controversial opinions mixed with a rich musical knowledge ranging from the classics to new wave and beyond have given extra colour to the popular international format. Thanks to his passion and dedication to his ideas and pupils he has won both editions firstly with the group category in 2008 and more recently with the 'over 25' vocalist category bringing 38 year old Matteo Becucci into first place.

Depeche Mode have announced that the Martin Gore-penned track Peace will be the second single from the Sounds of the Universe album. The single will be released in various formats on 15th June.
In the meantime there's a Peace remix competiton through the official website . From April 28 to May 26, 2009, the band are inviting "all budding DJs and aspiring producers out there" to remix 'Peace'. The winning remix will be released on Beatport.com through Mute Records.
The 'Tour of the Universe is set to begin shortly with a warm-up gig in Luxembourg on Wednesday, May 6th followed by the opening gig proper on Sunday, May 10th, 2009 at the Ramat Gan Stadium in Tel Aviv, Israel.
The band have just completed live TV performances in the UK on Jools Holland's Later show and in the USA on Jimmy Kimmel Live. Both appearances featured live renditions of Wrong and a re-working of the now 20 year old hit Personal Jesus. Audiences at the Jimmy Kemmel show were also treated to a live mini-gig featuring new tracks as well as older songs such as Walking in My Shoes and Enjoy the Silence.