Of Ants and Turtles and Electric Video Dreams

I was interested to read this interview with video and film director Steve Barron this morning. I didn't know very much about him although of course was well acquainted with his work on seminal pop promotional videos starting in 1979 with The Jam and Secret Affair, moving onto pop pioneers Adam & the Ants, The Human League, Tears for Fears, OMD, Simple Minds et al, and then winding up with the big boys like  Madonna, Bowie, Bryan Adams and Michael Jackson (Billie Jean), while still remaining faithful to A-ha throughout.
He also directed a couple of films including the 80's-pop fuelled comedy sci-fi Electric Dreams and some other things which were, and remain, off my radar.
The abovementioned article was there to plug his new autobiography "Egg n Chips & Billie Jean: A Trip Through the Eighties", which from the Kindle preview actually looks quite entertaining.

His videos seem to always have that grainy, slightly old-fashioned feel to them which I quite like. Here's one of those early, seminal videos from 1980 (featuring the legendary GIANT PLUG!). 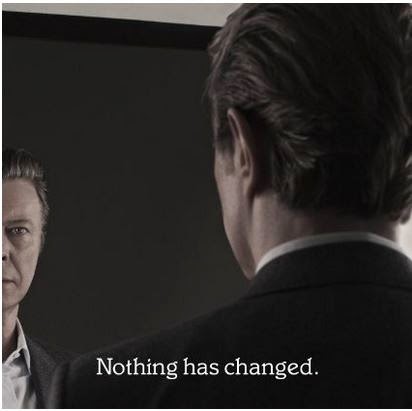 Well, David Bowie's latest compilation Nothing Has Changed is finally now after being announced a few weeks back. Available in three different versions (double CD, triple CD - with their relative digital download equivalents - and double vinyl) each with its own different artwork, depicting Bowie looking into a mirror at various stages of his career (my favourite one here on the left). Although they all stick to basically the same songs each has its own individual tracklisting.

The triple CD version is possibly the most interesting, and the most complete to date. This version features the tracks Your Turn to Drive, previously an internet-only single, and Let Me Sleep Beside You, which is previously commercially unreleased, both being from Bowie's nigh-legendary unreleased 2001 album Toy. The jumbo version also follows the original idea of presenting tracks in reverse chronological order starting with new single Sue and winding up with Liza Jane, a track released by Davie Jones and the King Bees, apparently the first single ever to be released by the boy Bowie back in June 1964...and quite a corker it is too! Nothing has changed? Well, we wouldn't say that... 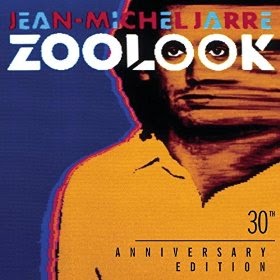 The remastered 30th anniversary edition of Zoolook by Jean Michel Jarre has unexpectedly turned up as a download only on amazon.co.uk and other download sites (available from 18th November on some in Europe). Although its part of the Sony JMJ re-issues which started earlier this year with Oxygène, Equinoxe, Les Chants Magnètiques and three live albums, this is the first to appear billed as an actual remaster.

The digital download release does in fact coincide with the original album release of November 1984. As usual I'm in two minds as to whether I should download the mp3 files straight away or wait for the actual hard copy to come through my letterbox. My original vinyl copy never did get all the play the earlier albums did although perhaps things will change this time around with the new issue which by all accounts has vastly improved sound with regard to the original or even successive digital editions.

Having said that I have always found the (over) use of the new fangled sampling technology rather tiresome, and despite all his efforts to always come up with something original, Jarre's electronic doodlings were beginning to tire a little. A more recent reworking of Zoolookologie however shows that its a work that stands up to the test of time surprisingly well, nothwithstanding this cringey video - a colourful slice of mid-80s euro-kitsch:

Official news on the further new releases is scarce - at least on the interweb - and this Spanish-language site is the only one I could find which confirms the re-issue of the next five albums in CD format as of 2nd January 2015. Olé!

David Bowie has just made public the promo video for his latest single Sue. Here it is: 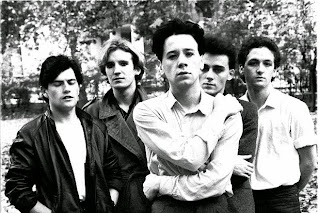 I've never had a real adoration for Simple Minds. They did however manage to find a place in my record collection during their heyday, jostling for a place among The Human League, OMITD, Gary Numan et al.
I caught onto them quite late in 1981 with their Sons and Fascination/Sister Feelings Call albums (of which I had the combined version on cassette), moving backwards, but only as far as Empires and Dance (1980), then forward to Sparkle in the Rain (1984) which many hailed as a poor follow up to 1982's classic New Gold Dream, undoubtedly their most accomplished album. Much like OMD they sold out a bit with the Don't You Forget About Me contribution to the Pretty in Pink soundtrack, and after that it was all rubbish as far as I'm concerned.
Except up to now: their new album Big Music is certainly a return to form with some excellent songs and some beefy modern production to back them up. Blindfolded is a blinding (geddit?) opener, followed up by Midnight Walking, Honest Town and the title track all just as good. The ensuing Human is perhaps the weakest track but the rest is all up to scratch in LiM's book. Our only qualm would be Broken Glass Park tagged on almost at the end, although that's already been a Radio2 'hit' so has already done its job rather nicely thankyou.
There's also a deluxe version with more tracks and remixes on the bonus disc, although one wonders why they've gone back to cover versions: the rather pointless Riders on the Storm and Dancing Barefoot again.
However, all that's just unnecessary fan-fodder so just stick to the main album and you'll be OK.

Here's my Simple Minds Top 10 playlist, starting with a couple of tracks from Big Music: