Ok, I give up. I can't do it. I just can't write find the words for any kind of comment or review of this album, other than: It's perfect. It's faultless. It changed my life.  It changed a lot of people's lives. It has saved lives. It changed how I listened to music. It's got two songs about Joan of Arc. They're both perfect. It's got an instrumental title track, halfway through side two. This album moves me. There's nothing better than this album. Not by OMD and not by anyone.
If you've never listened to this album you should. Now. Buy it, borrow it, steal it. Just get it. Just sit and listen to it. Listen to it good and listen well.


Surrender yourself to Architecture & Morality.

(these videos are for sampling only. You MUST listen to the whole album in its entirety.)

Countdown to Christmas: Band Aid - Do They Know It's Christmas

Best Christmas pop song ever.
a 00:11 No comments:

Email ThisBlogThis!Share to TwitterShare to FacebookShare to Pinterest
Etichette: 1984, christmas


Always thought this was more of a Pagan type song but turns out it is a bona fide traditional Christian tune, dating back to the Middle Ages, no less with 'Ii dulci jubilo' and the rest of the original words being a maceronic (good word) mix of Latin and German.
In 1975 ye good olde 'trad Dad' Mike Oldfield brought the tune into ye moderne age - forgetting all about the words - with this jolly interpretation of In Dulci Jubilo which gets duly pulled out at folkie Christmas gatherings, and quite rightly too. Our Mike does so like to do things all on his own, and here's a classic video performance using 'modern' film techniques to show him playing all the instruments at the same time. Must have been hell to synch back in the 70s.
So, good Christian men (and women).. Rejoice! .. and jig around a bit too to the multi-instrumental talents of Sir Mike of Oldfield....take it away Mike:

Back to the eighties, and here's a jolly festive 'rap' (get it?) about single Yank chick who isn't too keen on Christmas, gets "world's smallest turkey", forgets cranberries then meets man of dreams in store whilst purchasing said berries. End of.
The song was only  a minor hit in 1982 although seems to have become a kind of 'noo-wave' cult track in the meantime, covered by the Spice Girls among others. Sadly, there doesn't seem to be any official video or performance so here's one someone's very kindly done with all the lyrics: very handy for your Christmas karaoke party.

Email ThisBlogThis!Share to TwitterShare to FacebookShare to Pinterest
Etichette: 1982, christmas

Countdown to Christmas: Saint Etienne - I Was Born On Christmas Day

Top Christmas tune from almost the only "nineties" band worthy of my aural attenton, albeit somewhat inconsistently. Not sure what I dig most about this song: the duet-vocals, the lyrics ("..getting moody after Halloween.."), the beat, the two-note guitar solo, or that lovely melancholic keyboard line which was probably played on one of those melodica things you blow into (see New Order - Your Silent Face).

Anyway nothing about this song is not amazing, and here's a vintage TOTP performance from 1993 with guest vocalist Tim Burgess and our Sarah in a smashing party dress. Roll the tape....


Amazingly hard to find a decent video to this one on youtube, although an healthy amount of shit videos and shit cover versions, and even this "official" one got the spelling and artist all wrong.
Anyway here it is . .needs no comment, save that sadly its message is as valid today as it was forty* (yes, 40) years ago. War is over, no it ain't. The only ever totally cool use of the "Xmas" abbreviation.

Email ThisBlogThis!Share to TwitterShare to FacebookShare to Pinterest
Etichette: christmas

Let's get together again

A bit slow on this one but old muckers Vince Clarke and Martin L Gore are getting together again to make music as VCMG, almost 30 years after Clarke quit Depeche Mode leaving Gore with all the song-writing duties.

As with many band splits it's been beneficial to both parties over the years,as proved by the global success of ver Mode and Clarke's relatively smaller yet nonetheless important career with Yazoo and Erasure.

Anyway here's the official blurb on the new stuff:
VCMG is the fruit of initially tentative discussion and subsequent enthused collaboration where Vince and Martin, both influential as pioneers in electronic music, get to exercise their lifelong love of the genre as the techno inspired VCMG. The first release is an EP entitled Spock. EP1 / SPOCK will feature remixes from Edit-Select, aka Tony Scott, the UK DJ / producer and founder of EditSelect Records whose previous remix credits include Speedy J, Death In Vegas and Gary Beck; Regis, British techno musician Karl O’Connor, member of the Sandwell District collective and co-founder of Downwards Records); DVS1, Brooklyn based producer Derek VanScoten (Radiohead / Sleigh Bells / Emancipator); plus XOQ, the alter ego of Californian Überzone / Q, who mixed the VCMG album.

Call me a sad nostalgic, but it's not  a patch on the "old-school" Vince n Martin stuff: 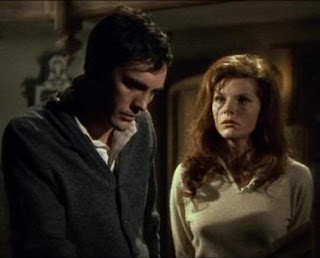 I don't usually talk about films, as I'm not really much of a 'film-buff' as they used to be called, but don't get me wrong I do like a good flick now and then, especially if it's got some decent music in it.

Quite by chance the other night I came across The Collector, a 1965 film starring Terence Stamp and Samantha Eggar, which was being shown on late night telly. It's quite a scarey story about creepy loner and butterfly collector Freddie (Terence Stamp) who kidnaps art student Miranda (Samantha Eggar) just for the hell of it and keeps her prisoner in the cellar of his posh Tudor home (Freddie had suddenly become rich by winning the pools some time hence).

It's a great film in a 1960s kind of way, with some interesting outdoor shots in London and a small English village, although what struck me most was the music used during the film in great quantities and to great effect. Getting to the closing titles I saw that the soundtrack was done by none other than Maurice Jarre, father of Jean Michel, who did quite a lot of film music in his time, and who sadly passed away a few years ago. Here's a taste of Jarre's work with the 'theme' I found on youtube. I'd love to locate the full soundtrack album if it's still out there.


NB "The Collector" not to be confused with a 2009 American horror movie of the same name which is probably nowhere near as good.

Email ThisBlogThis!Share to TwitterShare to FacebookShare to Pinterest
Etichette: 1965, film

I Love 1981 - pt. 23
With so many great albums out this time in 1981, let's have a quick look at some of the better singles of the time which may otherwise have escaped our avid attention:


New Order - Everything's Gone Green
The low-profile band's second single  was released in November and, typically, not included on their debut album Movement released around the same time. Gritty electronics mix with trademark bass-guitar riffs and electro-steady drumming, plus the usual enigmatic lyric (and title). A blueprint for their later electro-dance numbers to follow. Again , there was an excellent 12" extended version.

Scritti Politti - The "Sweetest Girl"
More from the indie scene, as championed by John Peel, but also making it onto other radio shows although sadly not onto the telly or into the charts.

ABC - Tears Are Not Enough
One band who did make it out of indie-obscurity into the big time were this erstwhile electronic experimental outfit from Sheffield (Vice Versa), now the glitzy and funky Treveor Horn-produced ABC. They would go to make one of the biggest albums of the 80s and this was their debut which got to number 19: