Spotted on Spotify: It’s Immaterial - 'Life’s Hard and Then You Die' #newmusicfriday 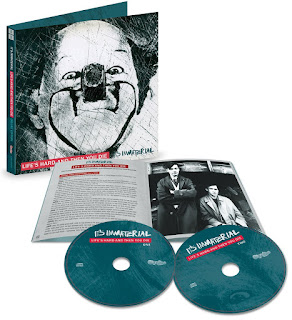 Not really new music as this album originally dates back to 1986, but it's one I've been pretty attached to over the years even though it never really seems to figure in my true favourites of the eighties and otherwise. Some may remember the truly original single 'Driving Away From Home', which made It's Immaterial into a kind of one hit wonder, even though I am still baffled as to why the truly brilliant Ed's Funky Diner wasn't a hit too - that is one of my most favourite (eighties) 12" records ever.

Anyway their cheerfully titled album Life’s Hard and Then You Die has now undergone a long overdue makeover and has been fleshed out with all manner of goodies to form a deluxe edition. This definitely needs investigating as a timeless work of pop by the Liverpool duo which never really adhered to any particular genre so remains undated and may even sound like it has just been recorded. For the uninitiated think China Crisis with a bit more edge.

The new Deluxe is available from usual outlets and also thankfully on Spotify, which is how we are enjoying it for now, even though sadly the John Peel Session versions are not available in said streamage. We'll just have to wait for the real thing to plonk on our desks. Life's hard....