A little off the musical radar, just came across this very amusing blog, or faux-blog, produced by Scarfolk Council. Here's the blurb :

Scarfolk is a town in North West England that did not progress beyond 1979. Instead, the entire decade of the 1970s loops ad infinitum. Here in Scarfolk, pagan rituals blend seamlessly with science; hauntology is a compulsory subject at school, and everyone must be in bed by 8pm because they are perpetually running a slight fever. "Visit Scarfolk today. Our number one priority is keeping rabies at bay." For more information please reread.


Scarfolk is a marvellous yet rather unsettling politically-incorrect alternative world. Something like what would've happned if we'd never had punk rock or Thatcher or any of that rubbish. It's Life On Mars, but worse..  here are a few publications available..:

Email ThisBlogThis!Share to TwitterShare to FacebookShare to Pinterest
Etichette: 1973

I'm really glad that a lot of bands who were making good music 30 years ago are still coming up with the goods today, simply because most modern music is rubbish. Orchestral Manoeuvres In The Dark are a case in point. Here they are standing proudly, flags aloof on the cover of Smash Hits (issue Feb 17th - March 3rd 1983) with an interview inside on the subject of their new album Dazzle Ships and new single Genetic Engineering (ad also inside).

..and as if by some strange coincidence the band have recently given news of their new album English Electric, out in April, with some tasty teasers of what's to come. Ironically enough the new tracks seem to take things up where Dazzle Ships left off, and that's just fine by us.

Email ThisBlogThis!Share to TwitterShare to FacebookShare to Pinterest
Etichette: 1983, 2013, OMD

..not that being 80 years old means anything to such an active and generally marvellous person like Yoko Ono. Excellent post and pictures of Mrs John Lennon over here. May she live until 100 and beyond.... 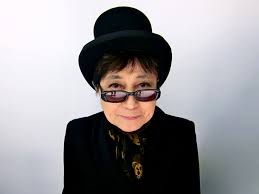 PS I know this post is a day late but yesterday i was busy with other stuff...
a 16:09 No comments:

Email ThisBlogThis!Share to TwitterShare to FacebookShare to Pinterest
Etichette: 1982, 1983, ABC

Possibly the fastest cover version ever to be produced ? Here's the usually very interesting Parralox and their version of Depeche Mode's new single Heaven which came out just 5 days ago.

Thank you to Vibracobra23 for uploading this (on my request!) It's the complete OMD session recorded exactly 30 years ago in January 1983 as a preview of some Dazzle Ships tracks - namely Genetic Engineering*, Of All The Things We've Made, ABC Auto Industry - which were officially released a few weeks later. The sesh was topped with what I reckon was a cracking version of Bunker Soldiers, sadly ignored on the official Peel sessions CD release.
Anyway here it is at last in all its glory, complete with Peel banter twixt the tracks which gives it a nice authentic feel.

*note: the band were apparently more content with this particular mix of Genetic Engineering than the finished official release.
a 10:37 No comments: