Floppy fringes at the ready ..

...for seminal New Romantic band Duran Duran release their debut eponymous album this week in remastered, expanded, extra-tracked, DVD-added format. As well as the debut in it's entirety on CD1 you'll get an extra CD with unreleased demos, remixes, Radio 1 session and all that plus DVD with TOTP, OGWT and Swap Shop performances and two naughty "uncensored" Girls on Film video. Gotta be worth the 18 quid...
Here's the Durannies back in the good old days before yachts and sun-tans when the Brummie-boy-band were considered 'experimental' enough to go on The Old Grey Whistle Test:

The Cure - A Forest

Well as I've done a Siouxsie posting for 1980, better do a Cure one too. Never really took much notice of this lot until 1981 or even 1982 when the angst-factor really began to kick in but thankyou to Benge for reminding me that this track is actually from April 1980.
Not much to write about it so I'll just post the TOTP performance this time (yes you will see Paul McCartney for a split second at the start) .. listen again and again and again and again and again... 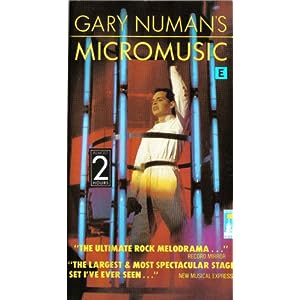 Just found out via youtube that Numan's legendary videotape Micromusic will soon be available on DVD for the first time.
Previously available only as VHS (officially, but torrent users may know otherwise) this film of Gazza's 1981 Wembley Arena London "farewell" concert will feature 25 tracks from the albums Tubeway Army , Replicas, The Pleasure Principle, Telekon and the still to be released Dance, with the usual spectacular Numan-esque visuals with one of biggest stage sets ever built in the UK.
The DVD will be made available at Numan's forthcoming Scala show, London on 13 April, and then through the official Numan site who assure that the footage and sound are fully re-mastered.
An hour long exclusive interview with Gary Numan talking frankly about the Wembley period is also included. Fun for all the family.
More info and orders : numan.co.uk
a 09:34 No comments:

I thought this track was from 1979 but trusty old Wikipedia informs me thatthis gem is 30 years old this year too, almost to the day.
Although Siouxsie & the Banshees had started off well with debut single Hong Kong Garden in 1978, these London punks had followed the almost 'novelty' hit with a couple of rather dark and dour albums, laying the foundations for goth and 'dark' music but too harsh for these ears still tuned into Abba and ELO.
A breath of fresh air then with Happy House which with it's catchy hooks and singalong lyrics striking the right balance between post-punk and (dare I say it) new-wave pop, tinged some deeper meaning. You had to dance and think at the same time.
The happy house (a pseudonym for the madhouse, of course) was originally about the group's fan club although turned out to be a snide comment on the emerging new Britain...well that's how I saw it anyway. "We've done no wrong, with our blinkers on" chants our Siouxsie as the youth danced along on TOTP.
So after a shaky start to the band's career Happy House opened the way for a solid track record for SATB throughout the 80s and into the 90s and which in some form or other continues to this day. Success with singles, albums and much critical acclaim has made Siouxsie and pals to be one of the most influential groups of the 20th century...and quite right too.

listen / watch here
get it on Best of or Kaleidoscope (1980) Although Peter Gabriel's first two solo abums had practically passed me by (save perhaps for the folky Solisbury Hill some years earlier during my own folky period..) the new single Games Without Frontiers from the upcoming third solo album quickly took our attention through a lot of radio play and publicity. The sparse electronics, easy sing-along lyrics ("Willy is happy again!") and hook lines made it a classroom/bedroom favourite ... oh and Kate Bush sexily singing 'jeeeeuuux sans frontières' as an added bonus. It was also an anti-war statement of course which boded well for my increasing political awareness and upcoming pacifist anti-nuclear stance. Great single.

I came across Biko in bargain bin some months later - unlike Games it had received next to no radio play and was probably banned from the already Thatcher driven BBC radio and TV. It deals with apartheid in South Africa and in particular the death of Stephen Biko, who I learned

about only from the back of the single sleeve. It's amazing really how little apartheid was discussed in those days, at least in the UK. I remember our religious studies teacher bringing it up once (but can't remember he name, bless her) and that's probably all we ever knew about it. The song still gives me the shivers now.


In the usual style I never got to hear the ensuing PG 3 album until some years later, via a tape copy, although I have to admit it still sounds good today in remastered mp3 form. Tracks like The Intruder, No Self Control (also featuring Kate) and Lead a Normal Life show a very dark side to Gabriel although things are lightened up with the stomping I Don't Remember, And Through the Wire and aforementioned Games.

Spandau Ballet have recently re-released their 1981 debut album Journeys to Glory in 're-mastered' and expanded CD special edition, although judging by the reviews, the results are less than favourable.
One reviewer on amazon.co.uk described the new issue as "Absurdly unlistenable. Harsh, painful, tinny. Spandau's best album ruined", while another states "It is physically hard to listen to, compressed, squashed, tinny, flat, and incredibly harsh and metallic." Another punter while lamenting the sound quality also complains about the omission of the Musclebound 12" and lack of DVD visual material.
LIM also has a first hand description of the albums 'digipak' packaging which is equally pants with bad printing and sloppy overall design. Oh dear.
Ths Spans' second album Diamond has also undergone the re-issue treatment although sound quality is apparently better. Something to do with the originals?

Let's hope fellow-New Romantic pioneers Duran Duran fare better with their re-release of their eponymous debut due the end of this month with re-mastered sound, B sides, extended versions etc. and DVD!

read The Quietus' excellent review of both Spandau albums and their collocation in time here.