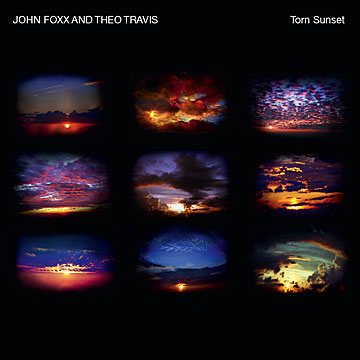 Official sources have given news of a new album by prolific electro-maestro John Foxx and sax-virtuoso Theo Travis. The album - Torn Sunset - will be out 'sometime in June' via Edsel/Demon records who also released Foxx's ambient-style collaboration album with Harold Budd Transluscence/Drift Music some time ago.

We don't know much about Theo here at LiM but it says 'ere that he is "of significance to the worlds of jazz, ambient music and progressive rock in the United Kingdom." Blimey!

Not much is known about the music which the new coupling has produced either, as it's all been a pretty safe-guarded secret up to now. But song titles like Skyscraper Starlight and Lost Marilyn Molecule and All The Tides On All The Streets all sound like good Foxxy-like ambient material à la Tiny Colour Movies, but this time with added .....sax appeal?

David Sylvian has announced a new double CD for May called Died in the Wool (sic.), variations on 2009's album Manafon, plus six new pieces, and a stereo mix of his audio installation when we return you won’t recognise us.

I'm not saying anymore otherwise SamadhiSound will probably get me banned again or something.

Here's yer link, do what you will.

Not content with having shook the world of John Foxx and the Maths with my attempt at making a music video for their ace album track Destination, I'm having another shot at distorting the world's imagination with a few visuals for top Interplay track Summerland.
This week we are taken into the wonderful world of integrated circuits and new-fangled "micro-chips". We'll see how they're made, what they do, and how they can help us with our....maths.
Wake me up when we arrive..

UK telly viewers may like to know that BBC4 are set to re-broadcast all the Top of the Pops shows in their entirety from April 1976 onwards evry Thursday night starting this week!
Why start at AD 1976? I hear you ask, well that apparently was the month when the Beeb actually decided to keep all the shows (presumably on tape) for archive purposes, supposedly for these 'time capsule' type occasions. Hurrah! Should make interesting viewing if only for spotting the daft dancing and "fashions" of the time as bad news is that the music itself won't be very good for quite a bit. Just as an indication, number one in the UK in April 1976 was Brotherhood of Man's Euro-winner "Save Your Kisses For Me" (no, you don't need to sing it thank you).

If anything the new screenings may spawn a new and better quality crop of youtube uploads from the show, as there are plenty of geeks out there willing to record and upload their fave TOTP moments througout the years (cough).
Speaking of which, we came across this rather good youtube channel which is doing just that. The aptly named memorylane1980s channel features loads of good stuff from said decade for your coffee-break sized viewing pleasure. Here's Sheffield band and 80's TOTP regulars The Human League doing one of their best in their 'democratic' line-up, with Phil Oakey dressed in what can only be described as a 'girl's blouse'.
Howzabout that then guys n gals?

I Love 1981 - pt. 8
Bit of a cheat this one as it's not from 1981 at all, but rather a re-issue on the crest of the chart success of the new Ultravox with Vienna and all that. The original 1978 issue had bombed completely, as had the accompanying album Systems of Romance, Foxx-Vox's third LP issue. The Island re-release of the then John Foxx-led band is not completely unjustified however, as back in 1978 the track was so ahead of it's time that it fitted more than snugly into the brand new 80's context amidst the new sounds which had since been emerging.

Although even this time around the single only just scraped into the Top 40, the influence of this music three years hence had already been felt by many, including a young Gary Numan who has oft said that Ultravox and their music were the inspiration for him to get up and do his Tubeway Army synth-rock thang. 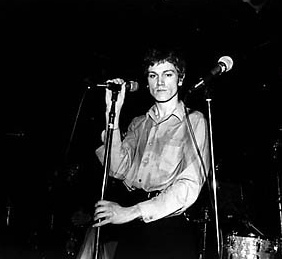 The unique style of Slow Motion (and similar tracks such as Dislocation and The Quiet Men also featured on this EP) with it's heavy synth bass, rock steady drums, and screeching keyboards were to all intents and purposes the blueprint for the new shiny new 80's Ultravox and were duly brought forward and developed by Messrs. Currie, Cross and Cann, with Midge Ure easily imitating the innovative scratchy guitar sound pioneered by Robin Simon (with Conny Plank producing then and now). Had John Foxx (pic. right) continued with the band, an ensuing product wouldn't have been to far removed from tracks like All Stood Still and New Europeans. But then again we would never have had Metamatic....