No Beatles tour of London would be complete without a trip to Abbey Road, to observe the studios and, naturally, the famous zebra crossing as immortalised on the Abbey Road album cover (left). Although I'd previously considered it a rather clichéd thing to do (and therefore avoided it) a trip to Abbey Road and environs is a quite emotional experience. 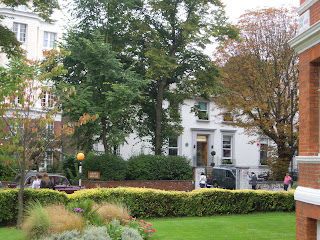 The road itself is set a fairly quiet residential area of North London, the nearest Tube station being St Johns Wood, if you're coming from central or south of the capital. Head straight out of the station cross the road into Grove End Road and after a few metres you're practically at the zebra crossing itself with AR Studios on the other side.

Luckily it was fairly quiet the morning I was there, and so just manged to get some decent photos including the obligatory one of yours truly crossing over (physically and metaphorically with your back to the studios, as The Beatles wanted it.). Just in time it turned out as shortly after arrived a crowd of Spanish tourists, as well as a young Italian lad who had his picture taken crossing over with no shoes on and cigarette in hand..wonder why? Sadly I forgot to have my pic taken standing on the right hand side pulling my breeches up, per John Lennon in one of my favourite AR cover session pics (see video below) 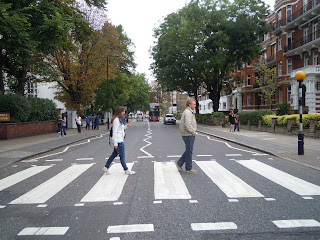 The studios themselves are perhaps misleadingly welcoming. The gates were open and there was a huge temptation to just walk over and have your photo taken on the steps. There were also people coming and going without any apparent need for passes or whatever. But a mere 'no unauthorised entry' sign on the gate was sufficient in deterring you from going too near. But to think how many have been through those doors to 'do' their albums...from The Beatles to Pink Floyd, from Kate Bush to Kiki Dee, as well as many many great filmscores being recorded there. That's the emotion, they'd all been there. 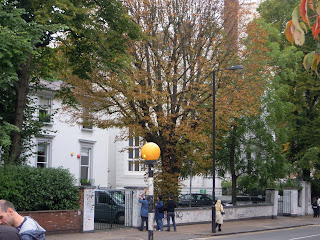 Just a word of warning. British drivers are generally disciplined and do stop at zebra crossings, but watch out that this particular one is right near to a busy junction and almost on a bend so watch out, and watch out especially those taking pictures who will have to stand in the road itself and not the pedestrian crossing! 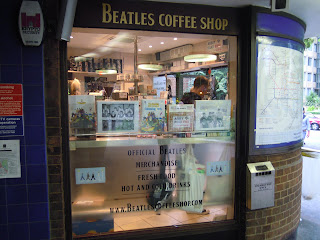 Souvenir-wise you can get most stuff from The Beatles Coffee Shop which is practically built into the abovementioned tube station.... Not much room to manoeuvre but there are a few tables outside too if it's weather. 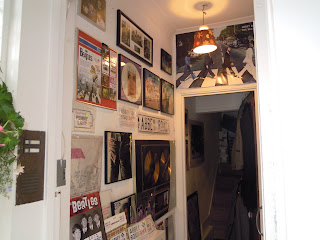 ...but also check out St John's Wood Collectables in Violet Hill (a short walk away) for more 'collectable' items, vinyl, books etc. as well as souvenirs. Friendly chap there too.