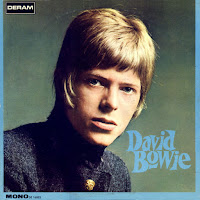 The David Bowie Story pt. 1
In an attempt to fill in quite a few gaps in my knowledge of the artist that is David Bowie, I've started reading David Buckley's exhaustive biography Strange Fascination.
Reading through the first few chapters I was intrigued by Bowie's eponymous 1967 debut album, often dismissed as risible and naive, and even completely batty.
Not necessarily so, however, I'm pleased to say as, therein lie by a surprising collection tiny colour folk-cum-music-hall-cum-pop songs which recount the rexpectives stories of some strange quintissentially English characters and situations. When discussing 'very early Bowie' many will cite the skeleton-in-thecupboard that is The Laughing Gnome although these songs - recorded earlier still - go beyond that. Hardly the stuff that rock stars and rock albums are made of, there's hardly a lead guitar in sight, yet wind instruments and percussion, for example, are used to full effect. Our young Bowie was already so obviusly striving to be something different from the rest.
Famously David Bowie was released on the same day as The Beatles' Sgt. Pepper and although very much in its shadow (what 1967 album isn't?) it goes some way to sharing its Englishness, both often harking back to pre-WWI styles and imagery updated for the new psychedelic age.
The 20 year old David Bowie was still some way from 'glam rock' and even Space Oddity yet we must savour this debut album for its pop-single sized portraits such as Rubber Band (below), Love You Till Tuesday (exhumed in the 80s), and Silly Boy Blue. Unsurprisingly many of them were made into a mini-film in 1969 before the big Oddity breakthrough.  We Are Hungry Men, Join the Gang and She's Got Medals touch on heavier themes, later to be explored by a more mature Bowie. Stay tuned.


a much better and more detailed review of David Bowie can be read here at Anorak Thing.
a 13:36