The rise and rise of David Jones 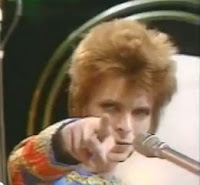 The David Bowie Story pt. 3
Almost forgot my ongoing potted history of Bowie, with info mostly gleaned from reading David Buckley's Strange Fascination.
Well we're just about up to the Ziggy Stardust period (1972-74), and so much has been written about it already I won't go into it, other than say I never really took to it much and still don't "get" the whole thing. Mind you, had i been slightly older at the time I may well have "got" it when watching Bowie/Ziggy and friends doing Starman on TOTP. According to Buckley it was a seminal moment (ah the power of telly!) in the rise of Ziggy Stardust, especially the moment in which Bowie/Ziggy points his finger straight into the camera and wiggles it around a bit while singing "you-ou-ou", upon which millions of British teenagers promptly swooned and were won over to the cause. They then dutifully went out and bought loads of glitter, glam clothing, oh and the record, the following Saturday. Here's said clip - watch out for that moment at around 1:37...


Love it or love it not, The Rise and Fall of Ziggy Stardust and the Spiders From Mars certainly assured Bowie's success, after much faffing about, and left a legacy that would influence so many for many years to come. In fact mention of the TOTP epiphany moment reminded me of the first time I - and many others - saw Tubeway Army, or rather Gary Numan, a Bowie-fan himself doing Are Friends Electric? on the show in 1979... he didn't point his finger, and we didn't faint, but the effect was basically the same.: things would never be quite the same again.